I started Being Superwoman to inspire others to be their most audacious self — to dream big — and to find that inner hero who can help them accomplish anything they set their mind to do.

When I was about 25 yo a few friends that I worked at a construction company in Edmonton, Alberta, were going out for a run after work. This group would get together and run races on the weekends and have fabulous stories to tell Monday morning. Curiosity piqued my interest and so I decided I would try out this running thing … and wouldn’t you know it … I could barely run around my block!!

I didn’t let my first step limit me from continuing and so I kept up with the running and soon I was up to three miles … which is where I stayed for a good number of years. Always a three mile run. Never a fast run … and never any greater distance (or thought of anything greater). That was until my friend Dianna invited me to complete a marathon with Team in Training. Because I’m adventurous I signed up and completed my first marathon in December 2001. This marked the beginning of my passion for running.

I kept running … in the mornings at 5:30 am with my friend Jeanmarie to the bottom of the Golden Gate Bridge … on weekends at half marathons or 10Ks … and in the evenings at a track workout where I learned the real reason why I run (to drink beer afterwards!).

Then something happened. I stumbled upon people doing Ultra Marathons (which means any distance greater than a marathon – could be a 50K, 50 Miles, 100 Miles!) … and I was like “I am never doing that!!” …. Until, you guessed it, one day I got inspired by my friends at the Tuesday night track workout telling amazing stories of their weekend running adventures. So in 2010 I completed my first Ultra Marathon … the Way Too Cool 50K run in Cool, California … in 7 hours and 24 minutes! I told you I wasn’t a fast runner!

Last year I ended up with a new title “injured runner” and had surgery for a meniscus tear. I also had a whole bunch of other life changing events so 2013 turned into a year without running. I’ve missed it dearly — I’ve missed my friends and their stories, and I’ve missed being inspired. So I’m now a regular at the gym to rebuild some muscle strength, and I’m finally back on the trails to build up the mileage again. And yesterday on my 2-mile run I found myself smiling because I was back doing something that was so authentically me.

Oh and I also signed up for the Lost Soul Ultra (50K distance) in September of this year because after all, I like big audacious goals. And I need a goal to keep me pointed in the right direction.

What is your passion? And are you being bold enough? Audacious enough? Where might a run around your block take you?? 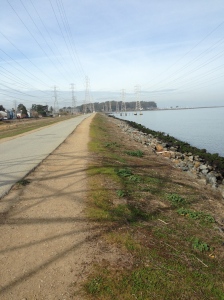 My 2-mile run … It doesn’t look like much, but it was everything!